Debt Swaps: How China Can Create Opportunities for Financial and Environmental Stability

As developing countries emerge from the COVID-19 crisis, they will need to pivot rapidly to relaunch their economies. Given the severity of the current economic downturn, the world has an opportunity to pivot to greener and more inclusive forms of economic growth in the next business cycle.

Standing in the way is a second crisis: sovereign debt. Governments cannot enact the climate-friendly growth commitments enshrined by their Nationally Determined Contributions, in accordance with the Paris Agreement, nor their commitments to reverse global biodiversity loss by 2030, while simultaneously facing serious debt distress.

China is in a unique position to support countries in addressing both of these crises at once. As the world’s largest bilateral creditor, it can consider a variety of sustainable alternatives for debt relief for the most debt-stressed countries, including debt-for-nature swaps, debt-for-climate swaps, and sustainability-linked bond issuances.

New research from the Global Development Policy (GDP) Center published in Science, discusses opportunities for China to support these efforts in low- and middle-income countries facing high debt exposure from Chinese loans. The research also highlights where environmental returns on investment show promise for China to consider in the lead-up to this year’s Convention on Biological Diversity’s Conference of the Parties (CBD COP 15).

Figure 1: A Global Outlook of the Potential for Debt Swaps in Countries Under Greatest Chinese Debt Exposure

Explore the interactive version of this map.

In some cases, different types of debt swaps may be worth prioritizing based upon the specific threats facing a country. For example, Senegal, Sudan, and Zimbabwe may benefit most from debt-for-climate swaps to reduce exceptionally high annual carbon emissions and increase investment in building climate-resilient communities in these highly climate-vulnerable countries.

Smaller countries, like Fiji and Togo, could benefit most from debt-for-nature swaps to protect their high concentration of threatened species and increase protection of their remaining intact landscapes for biodiversity.

Several other countries might also benefit from participating in debt-for-climate or debt-for-nature swaps, like Pakistan, Ethiopia, and Cameroon, which users can explore in more detail in the interactive.

Traditional ‘debt-for-nature swaps’ are an incentive-based solution for achieving conservation targets in highly indebted countries, where organizations and/or government creditors negotiate with government debtors to cancel or reduce debts in return for binding commitments to protect threatened species, reduce deforestation, or achieve other environmental goals, often through the creation of protected areas. Historically, these swaps have typically been led by large organizations, like The Nature Conservancy or World Wildlife Fund, which targeted relatively modest debts to increase protection in nationally significant hotspots of conservation concern.

The design of debt swaps has evolved to increase investments over longer periods of time, include more involvement of a diverse group of stakeholders, and ramp up enforcement. This includes the extension of debt relief incentives to facilitate national climate mitigation and adaptation targets in debtor countries, termed ‘debt-for-climate’ swaps.

While still in their infancy, debt-for-climate swaps appear to have great potential—both on their own and in combination with debt-for-nature swaps. The Seychelles recently implemented the first marine debt swap for dual nature and climate benefits, expanding marine protected areas to cover nearly one-third of the country’s seascape in exchange for relief of $21.6 million in sovereign debt.

The debt swap model has also propelled new frontiers of sustainability-linked debt restructuring, including green bonds, which are linked to particular local conservation, emissions-reduction, or climate adaptation goals. Globally, the green bond market is growing quickly and is projected to reach $1 trillion in 2021. Green bond certification schemes vary widely in their definitions, with broad agreement around the Green Bond Principles regarding how funds are used, how projects are selected, how proceeds are managed, and how performance is reported transparently. Among newly emerging options for sovereign debt are “nature performance bonds,” which incentivize measurable progress toward national conservation goals.

Why China Should Add Debt Swaps to Their Policy Toolkit

All eyes will be on China this year as it prepares to host the CBD COP-15 in May. Taking center stage in a world gathering for conservation goals will give China an opportunity to showcase its own progress in supporting global conservation and to incorporate sustainability into its debt relief negotiations moving forward.

China, together with its peers in the G-20, has participated in the Debt Service Suspension Initiative (DSSI) created last year, but this is set to expire in June 2021. The DSSI allows 73 lower-income borrower countries to reduce their bilateral debt payments during the COVID-19 crisis. Afterward, the G-20’s common framework will allow DSSI-eligible countries to apply for permanent debt forgiveness.

However, a group of former finance ministers and central bank governors voiced support for an alternative initiative, “Debt Relief for a Green and Inclusive Recovery,” that would link financial relief with support for borrowers’ social and environmental policy goals. Debt-for-nature and debt-for climate swaps fall squarely within this framework.

Even before the COVID-19 crisis, China indicated its willingness to lead multilateral efforts toward funding climate resilience. In late 2019, Chinese President Xi Jinping unveiled the Beijing Call for Biodiversity and Climate Change, alongside French President Emmanuel Macron. China and France both pledged to “mobilize additional resources from all sources, both public and private, at the domestic and at the international level, towards both climate adaptation and mitigation; make finance flows consistent with pathways towards low greenhouse emissions and climate-resilient development, as well as for the conservation and sustainable use of biodiversity, the conservation of oceans, land degradation amongst others.”

Chinese debt swaps would provide a valuable path to achieving global financial stability and mitigating environmental threats. Debt restructuring could simultaneously help countries recover from the pandemic and increase the likelihood that debt-stressed countries may be able to repay the portion of their remaining debts to China.

China’s support for adopting debt swaps would be a promising signal of the country’s joint commitments to biodiversity, climate change, and international finance.

While most countries could benefit from Chinese debt-for-nature or debt-for-climate swaps, priorities need to be identified to ensure China’s investments yield the maximum potential benefits. Crucial to this prioritization is the consideration of need and likelihood of success. Our analysis incorporates these factors into the assessment of countries’ debt swap potential based upon three key characteristics:

Where is Chinese debt relief needed?

In total, 102 low- and middle-income countries were considered in the analysis, with 41 countries prioritized with the greatest potential need for Chinese debt relief. 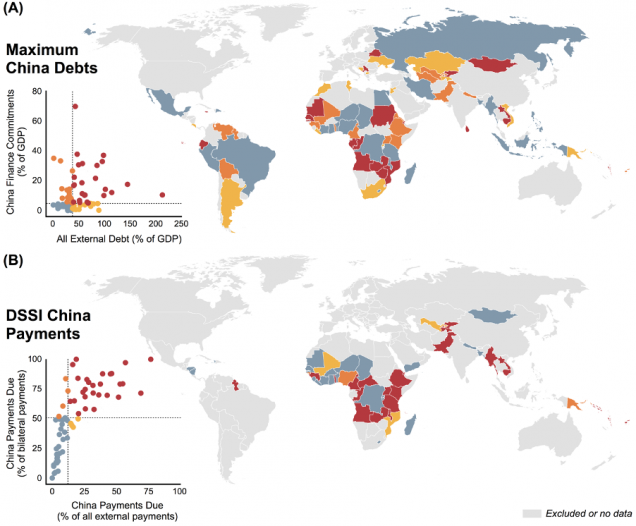 Countries prioritized (in red) based upon (A) their proportion of GDP reflected in Chinese finance commitments since 2008 and all current external debts, and (B) DSSI countries whose China payments dominated all other bilateral payments and much of their remaining external payments due in 2020.

Where are the environmental threats?

To assess differential benefits of debt-for-nature and debt-for-climate swaps across countries, countries were scored according to separate climate and biodiversity threats based upon how they compare to the global median of all 102 low- and middle-income countries.

For climate threats, country-level contributions to climate change (annual carbon emissions) and overall vulnerability to the impacts of climate change (Climate Vulnerability Index) were considered. Countries with an annual emissions rate greater than 6.08 Mt CO2 per year and a Climate Vulnerability Index greater than 0.478 received the highest climate threat score; countries exceeding one of these thresholds received a moderate threat score, and countries below both thresholds received a low threat score.

For biodiversity threats, each country’s annual rate of tree cover loss (as a percent of available forest in 2010) and the density of threatened species (mammals, amphibians, reptiles, and birds) were considered. Countries with an annual tree cover loss greater than 0.357 percent per year and a threatened species density greater than 0.00026 spp. per km2 received the highest biodiversity threat score.

Where are implementation opportunities greatest?

The presence of climate and biodiversity threats doesn’t necessarily mean implementing a debt swap will be successful—this may be because the government has few or vague existing commitments to climate mitigation, or there is simply a lack of ecologically valuable land remaining that can be protected (among other potential barriers to success).

To account for the opportunity for debt swap success, the costs associated with achieving each country’s nationally determined contributions (NDCs) for renewable energy under the Paris Climate Agreement were considered, as well as the proportion of countries’ remaining intact landscapes that are not currently covered by protected areas. Countries whose NDC commitments exceed 5.50 percent of their GDP (median) were given a high score for debt-for-climate opportunity, and countries with more than 78.39 percent of their intact lands unprotected (median) were given a high score for debt-for-nature opportunity. 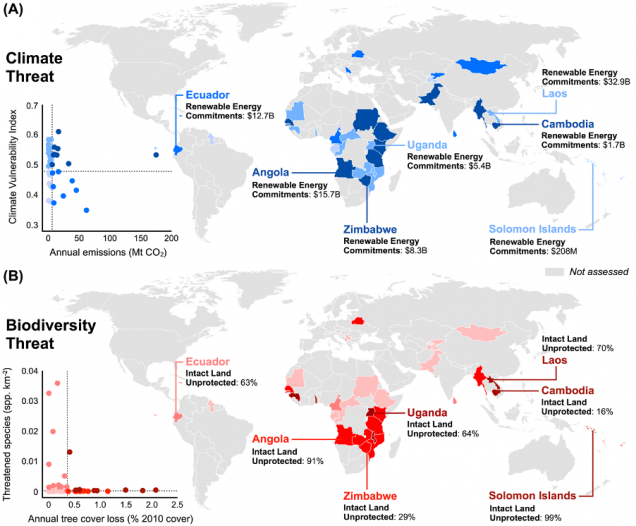 (A) Mapping the severity of climate threats based on countries’ contributions and vulnerability to climate change.

(B) Mapping the severity of biodiversity threats based on threatened species and tree cover loss. Opportunities highlighted for select countries, showing the estimated costs of existing renewable energy commitments and the extent of remaining intact land currently unprotected.

The overall potential for debt-for-climate and debt-for-nature swaps in each country with high Chinese debt exposure was calculated as the sum of the respective scores across environmental threats and debt swap opportunities.

Drawbridge Special Opportunities Fund LP and Drawbridge Exclusive Possibilities Finance Company Announce Funds Tender Give for Any and All of Their 5.00% Senior Notes Thanks 2021

Four Types of Stops You May Consider at Trading